Important Safety Lessons We Can Learn from Dumb and Dumber To

Posted by Chris Broughton
on 11 December 2014 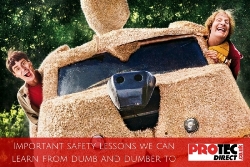 After a twenty-year hiatus, Lloyd Christmas and Harry Dunne are back, and they most certainly are dumber than ever. Dumb and Dumber To, which finally hits UK cinemas on 19th December, is a health and safety nightmare, with Lloyd and Harry putting themselves in ever-increasingly stupid situations as they embark on the search for Harry’s long-lost daughter.

The eagerly anticipated sequel to Dumb and Dumber, once again starring Jim Carrey and Jeff Daniels, isn’t the first place you’d think to look for a lesson on safety in the workplace, but there’s a lot we can learn from the dumb duo’s antics. Whether you work for Mutt Cutts or a machine engineering company, follow these important rules to stay Safe and Safer…

In one hilarious scene taking place in a funeral parlour, Lloyd and Harry take a refreshing sip of a transparent blue liquid, which they mistakenly believe to be a Slurpee. It turns out to be embalming fluid, reminding us that you should always read the label on any substance you aren’t sure about – and until you do, definitely don’t put it in your mouth!

Use All Machinery and Equipment Properly

From riding a bike with two people on it to driving the Mutt Cutts van off a ramp and into the air, and even parking it in the middle of a busy road, it’s clear that Lloyd and Harry don’t have the first clue about operating anything properly. They don’t even wear bicycle helmets, for heaven’s sakes. Using equipment or heavy machinery, and certainly driving cars without due care, training or regards for the rules is a recipe for disaster, and especially if you fail to wear proper PPE too.

The movie begins with Harry collecting Lloyd from the hospital, where he is sitting in a wheelchair with a catheter attached. Instead of asking a nurse to assist with its removal, Harry detaches it by force instead. Ouch. Whether you’re inside or outside the workplace, you should always seek proper assistance from a qualified medical practitioner in the case of an incident. In real life, your health is no joke!

Pranks Should Be Fun, Not Potentially Fatal

Don’t get us wrong, we love to play the odd prank on our friends and workmates. However we wouldn’t dream of putting their lives in danger in the process – unlike Lloyd and Harry, who fill Captain Lippincott’s motel room with fireworks, which explode, set him on fire and send him crashing through a door and into the pool to put out the flames. Of course we realise this is only a scene from a movie, but we’ve seen enough YouTube videos to know that people really do try this! Just remember that the best kinds of pranks are those that leave everyone in one piece.