Health and safety in football: This season’s new rules 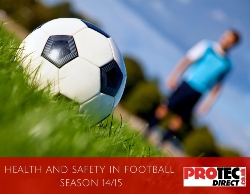 It barely seems a week has gone by since the last Premier league season came to a close, and then there was the excitement of the World Cup in Brazil in between.

But the new season is almost upon us. And along with the flurry of exorbitant transfer deals flying around, new kits and shirt sponsors, and the usual merry-go-round of managerial appointments, the other part of any new season we sometimes forget is the new health and safety rules.

As the game develops in terms of tactics, financial rules and equipment, the laws and rules of the game, stadiums and policing of matches also needs to change to keep up. Each new season usually sees some new health and safety laws brought in to protect players.

In recent years we have seen the introduction of mandatory stoppages for head injuries. This was a very positive step in the right direction for protecting players’ safety but new laws coming into play this season take things a little further.

There were a number of controversial incidents last season involving potentially concussed players being allowed to play on. The FA faced criticism after Spurs goalkeeper Hugo Lloris was allowed to continue playing after being knocked unconscious by Romelu Lukaku’s knee. A few weeks previously another Spurs player Andros Townsend had to be given oxygen after being knocked out during a collision with advertising hoardings around the side of the pitch. He too was allowed to continue playing.

New rules stipulate that players will have to be removed from the field of play and assessed by the club’s doctor. If there has been a ‘confirmed or suspected period of loss of consciousness’ players will be prevented from returning to the field of play. As well as this, ‘tunnel doctors’ will be mandatory at all Premier League games and staff will be trained how to use a concussion tool.

In addition, all players will be subjected to baseline testing in the pre-season to assess their sharpness and mental faculties. This will make any diagnosis of loss of consciousness or potential concussion easier for doctors when injuries occur.

"Player safety is paramount in all sports and the Premier League has a strong track record of introducing new medical rules and provisions as top-level football has evolved and new challenges emerged," Premier League Director of Football, Mike Foster said.

The new rules also follow several similar incidents in the World Cup where players were knocked out or lost consciousness but carried on playing. Both Uruguay’s Alvaro Pereria and Argentina’s Javier Mascherano were both allowed to play on after receiving severe blows to the head.

Whilst fans might appreciate the commitment it takes to carry on after such incidents, it is not in the best interest of the players. Head injuries can be extremely severe and have both serious short and long-term consequences. Playing on after a blow could exacerbate the damage and increase the risk of severe concussions and even worse.

After all, despite all the huge sums of money, enjoyment and entertainment provided by the Premier League, it is still a workplace at its most basic level. Footballers should be entitled to the same workplace health and safety laws as the rest of us. No ordinary employee would be expected to continue working after such an injury, so why should the rules be different in the Premier League?