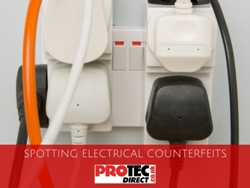 Whether it’s a knock-off pair of sunglasses or a fake Louis Vuitton handbag, getting what looks like the genuine article at a fraction of the price is definitely alluring. And while these counterfeits are part of a larger global criminal economy, it doesn’t seem like you’re doing anyone any real harm by wearing a pair of Ray Bon or Ookley shades. (Although, you do need to bear in mind the UV protection you’ll be missing and how this might affect your eyes.)

However, there is a darker and more dangerous side to counterfeit products that can have serious repercussions for your well being. Counterfeit electrical goods make up somewhere between 15 and 20% of the global market for fake products. With everything from computer chargers to hair dryers being produced at budget prices, the risks of electrocution and fire are significantly increased.

It’s something that is concerning the manufacturers too. Following the news that a Chinese woman was electrocuted by a non-Apple charger, Apple have launched a worldwide programme to replace counterfeit USB chargers due to ‘safety issues’.

It’s simply common sense to try and avoid dodgy electrical products. It might seem like you’re getting a great deal but if it sounds too good to be true, then it probably is. And it’s really not worth putting yourself or your loved ones at risk for the sake of a few quid.

However, further problems arise around being able to spot fakes when shopping and avoiding counterfeits is not always easy. It’s true that in almost all reputable high street stores regulation and industry standards usually prevent counterfeits hitting the shelves (although it does still happen occasionally). And you’ll have some recourse to return and exchange should you discover the products to be a fake. However, shopping in less regulated places such as some markets, car boot sales and when abroad puts you more at risk.

Shopping online has also opened up a whole series of new problems, as it can often be difficult to know what you’re getting.

So here are some general rules, including some online specific rules, about how to spot and avoid fakes.

If it sounds too good to be true then it probably is. Manufacturers are rarely so generous as to not want to make a profit from their product, so if the numbers don’t add up, avoid like the plague.

Pay attention to what you’re buying. This particularly applies online, so watch out for little clues as to the authenticity of your purchase. Products are designed to look exactly like the originals but often sellers are not legally allowed to claim this, so watch out for words like ‘style’, which point out the truth.

Handle the goods. If physically purchasing, then pick it up and see if it feels right. Counterfeits often use poor quality materials and build quality, and you can usually tell it’s a fake just by holding it. Even some packaging will give the fakes away.

Look for the safety certification. There’s a whole system of safety certificates and signs that are used to prevent fakes fooling consumers. So it pays to find out what these are, who issues them and look for the right stamps on the right products. In the EU, look out for the CE safety marking on electrical products.

Check the manufacturers’ website. Many online purchases are made through third parties but the necessary info about all products can usually be found on the manufacturers own home page. So look up serial numbers and specs before buying to check it’s the real deal.

By following these few simple rules and consulting Electrical Safety First you should be able to get the right products for the right price, staying safe and secure with a guarantee of quality.