Posted by Chris Broughton
on 4 July 2014 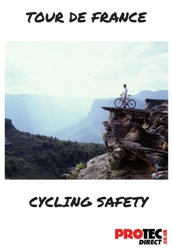 Without question the world’s greatest cycling race, the Tour de France is a gruelling and enthralling competition that pits the best riders in the world against each other over sprint, mountain, time trials and more. As well as showcasing the best riding in the world, it also shows off the stunning countryside across France. Only this year, things are a little different.

The Tour is starting in Yorkshire
Stage 1 is 190 km from Leeds to Harrogate. Stage 2 is 201 km from York to Sheffield and Stage 3 is 155 km from Cambridge to London. It’s not the first time that the Tour has been in England but to have the honour of hosting the first stage, or Grand Départ as it’s officially known, is something very special. The small village of Cragg Vale is already reaching fever pitch with excitement and the bunting is already up.

The Tour is expected to bring in about £100 million to the region, and without the prospect of a World Cup quarterfinal for England to worry about, the event has taken on even more significance and importance.

Cycling has been growing in popularity in the UK over recent years. The success on the track and in the Olympics of Sirs Chris Hoy and Bradley Wiggins, and then further historic success in the Tour of Wiggins and Chris Froome, has increased interest in the sport to record levels. More and more of us are buying bikes and hitting the road in an effort to keep fit, have fun and improve our times.

Cycling safety
While this is positive in almost every single way, especially given the fitness and health epidemics, there are some concerns over cyclists’ safety. In London last year, for example, the record numbers of cyclists also saw record numbers of injury and fatality on the roads. In one two week period in 2013, six cyclists were killed on the capital’s streets in just two weeks – which led to widespread protests across the city.

While drivers taking a more cautious and considerate approach to cyclists is essential on the roads, cyclists themselves have to do all they can to protect themselves. Helmets are not yet a legal requirement but by every other conceivable standard they should be obligatory.

A good set of functional lights is required by law and the bottom line should be the more visible you are, the better. Always make sure the lights are working and can be seen by other road users. There’s even a movement to use light reflective materials for painting frames to make them even more visible.

Wearing hi-vis clothing is also encouraged. A vest or some reflective bands will increase your visibility. Whatever you can do to make yourself more obvious, both day and night, will improve your safety on the road.

It’s also only good sense to make sure your bike is in good working order. By law, car owners are required to ensure their vehicles are road worthy with an MOT. However, there is no such requirement for bicycle owners but this does not mean it is acceptable to overlook the maintenance of your bike. A regular service will cost less than £50 in most bike shops, and the more regularly you look after the bike, the less you will have to spend on it. You can even learn some basic bike maintenance yourself, so that it further reduces the cost.

The riders in this year‘s tour have whole teams of mechanics working on their bike and take their safety very seriously. At those speeds they can’t afford to take chances. So, let’s enjoy the tour this year but also think about how we can stay safe on the roads.