Posted by alona zakharchenko
on 13 June 2019 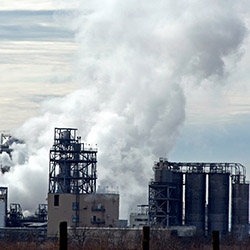 Matthew Holder, the Head of Campaigns for the British Safety Council, has urged the government to act urgently on reducing air pollution.

The British Safety Council has launched its Time to Breath campaign, which draws attention to steps that can be taken to reduce the exposure of workers to harmful emissions. As part of this campaign, it has developed the Canairy app for outdoor workers to record data on their air pollution exposure and use this information to drive change.

Holder claims that roughly 36,000 early deaths in the UK are linked to air pollution. In the workplace, emissions can be reduced with extraction safety equipment and workers wearing protective workwear, including air pollution masks. There are thousands of drivers and other workers employed outside who are subject to air pollution from traffic and this cannot be reduced by employers. Holder argues that this issue can be tackled by government regulations, and has asked its members to write letters to their MPs that include the message:

“It is a legacy of years of inaction by regulators and public bodies which choose to ignore the mounting evidence of the impact of air pollution on our health and lives. I am deeply concerned that we are ignoring a present health risk to the thousands of people around the country who work outside for a living.”

Holder compares the dangers of air pollution with that of asbestos, from which workers are now protected by law, and believes similar safeguards should be in place when it comes to toxic air pollution.