Posted by Chris Broughton
on 18 November 2014 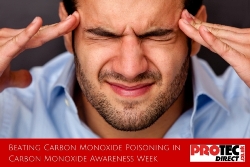 Sometimes referred to as the ‘silent killer’, carbon monoxide is an invisible poisonous gas that has no smell or taste. Breathing it in can make you unwell and even kill you. Each year in the UK around 200 people go to hospital with suspected carbon monoxide poisoning, with around 40 of those cases being fatal. Thankfully, this number is significantly lower than it used to be but the work is far from done and the fight against carbon monoxide poisoning goes on.

That’s why CO Awareness is running its Carbon Monoxide Awareness Week for the ninth year in a row. The charity aims to increase awareness about the issue in order to prevent further needless death, pain and suffering to victims and their families. This year, the week is being held from Monday 17th to Sunday 23rd November.

How You Can Take Part

It’s your chance to get together with other people, businesses and organisations to raise awareness about the dangers of carbon monoxide (CO). There are lots of ways of getting involved. You can add the CO Awareness logo to your website and promotional materials or use your social media channels to promote the cause. You might also want to hold an event in your community to make people aware of the importance of this issue.

If you run a small business or work in a team, you might want to share the materials with your staff or colleagues in the workplace. This is especially important as it is an issue that faces working environments as well as domestic situations. By sharing the information available during the week via email or on your workplace notice boards you will be helping to spread this important message.

The most common symptoms of carbon monoxide poisoning are headaches. Other major symptoms can include dizziness, nausea and vomiting, tiredness and confusion, stomach pains and difficulty with breathing. Because all of these other symptoms can have numerous other causes, it is often difficult to establish a link between them and CO poisoning.

As carbon monoxide is colourless and odourless, it is very difficult to detect, which means inhalation can occur without you even realising it. It’s produced when fuels such as gas, oil and wood do not burn properly. When this is happening in an enclosed space, the oxygen in the room is gradually used up and replaced with CO2. This is unable to burn which leads to the production of carbon monoxide.

After breathing it in, it enters the bloodstream and mixes with the haemoglobin and is carried around the body. This forms carbooxyhaemoglobin, which means that blood is no longer able to carry oxygen. As a result the body’s cells and tissue start to die.

Carbon monoxide is frequently caused by poorly installed or maintained appliances, such as cookers, heaters and boilers. Blocked flues or chimneys can prevent it escaping, causing build ups and dangerous levels of the gas.

If you suspect carbon monoxide poisoning because of symptoms you are feeing or notice in others, you should immediately switch off all appliances and ventilate the space. Move away from the source and call the HSE Gas Safety Line on 0800 300 363. You should also seek medical help, as it may be necessary to treat your symptoms urgently.

Increased awareness and campaigns like Carbon Monoxide Awareness Week all help to reduce the effects of this silent killer.