Posted by Chris Broughton
on 4 September 2014 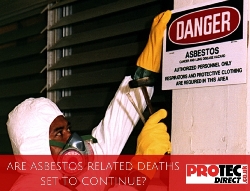 According to the Health and Safety Executive, asbestos is the single greatest cause of work related deaths in the UK.

Invented as a building material in the 1950s and used extensively until the 1980s, its properties as a fireproof material made it widely used in communal and large scale building projects.

However, if the material remains in good condition or is undisturbed there is little or no risk of it causing any damage. But if it is disturbed then the fibres it releases into the air can quickly get into the lungs and cause serious damage.

There are some places that asbestos was used in high volumes. These include between floors and partition walls. It was also sprayed on structural beams and girders, frequently used as lagging on pipe work and boilers and large sheets of it were also used to clad ceilings and water tanks as insulation.

Asbestos is an unseen killer; all too often you don’t know it’s there until it is too late, if you ever even know you’ve been exposed to it at all.

Strongly associated with asbestos exposure is mesothelioma, an incurable cancer which sadly is almost always fatal with most of those affected dying within a year of diagnosis. Using in-depth research from the Health and Safety Executive’s Mesothelioma Mortality in Great Britain project we take a look at how mesothelioma has had a devastating effect on the lives of many all over the country and how predictions are set to look within the next ten years.

Are you at risk?

There are certain situations and conditions where you may encounter asbestos. Knowing if you are at risk can be crucial. If you are working on an unfamiliar site then always take precautions, especially if the building was built prior to the year 2000. You need to be certain that checks have been carried out for asbestos before you start work, and if you are unsure, don’t start the job until you know 100%. Remember that as long as the fibres remain undisturbed they are of little or no threat to you.

It is also never a good idea to work with or near asbestos unless you have been trained to do so or know how to use the appropriate safety equipment.

What to do if you suspect asbestos?

Never attempt to sort the situation out yourself. As you have seen above, the numbers of people affected by and killed as a direct result of asbestos are frightening. We need to do everything we can to bring these numbers down. So, if you suspect asbestos, stop what you are doing, remove yourself to a safe distance and call in someone who is trained and equipped to deal with the problem.