A Look at the Skills Shortage in the Construction Industry

Posted by Chris Broughton
on 6 February 2015 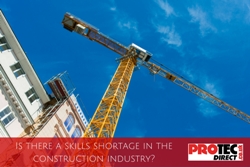 A recent news story in the UK papers focused on the shortage of skilled workers within the UK construction industry. According to the article in the Daily Mail, British companies were supposedly resorting to paying Portuguese bricklayers up to £200 a day because of a shortfall of UK workers.

If what is written in the article is correct, it seems that during the financial crisis of the last five years there was a significant drop off in key skill provision and training within the construction sector. Companies and educational institutions were tightening belts and investing in skilled labour was a risk too far when the demand simply didn’t exist. However, now that the tide has begun to turn and the building sector has picked up, this has created a gap between supply and demand that is proving difficult to fill.

Growing opportunities in the sector

Increased employment opportunities in 2015 and beyond are set to grow around 9% this year, according to a report by employment consultancy specialists Manpower. This follows on from a bumper 2014 which saw the highest level of job creation in 40 years - beating pre-recession levels. There are similar trends happening in related industries, such as energy provision.

What needs to happen: Part 1

This means there needs to be a concerted effort to get more young British people into the industry. The key to this seems to be finding the right ways to communicate with school leavers and convincing them that a career in construction is a viable one. This should involve construction firms partnering with schools and colleges, opening up apprenticeship experiences and work placements.

At the moment, the links between the education establishments and the construction trade simply don’t exist in any real sense. With record numbers of young people going to university and college in order to earn more money, it seems very strange that we are reportedly paying out up to £200 a day to foreign workers.

What needs to happen: Part 2

The second thing that needs to happen is an improved provision of skills and training. This also diminished during the recession, perhaps thanks to lower demand but also due to less investment. Skills providers offering courses in construction, plumbing, electrical work and more need to actively target young people.

According to a cross-party parliamentarians’ enquiry from last year, carried out in conjunction with the Chartered Institute of Building (CIOB), nearly 200,000 construction jobs will need to be filled by 2018. However, only around 7,000 people completed a construction apprenticeship during 2014. The report’s title calls this the ‘Lost Generation’ – which constitutes around one million young people who could potentially have been directed toward a career in construction if the resources had been in place.

Building for the future

The UK construction industry appears to be on the way up again, with increased demand for housing pointing towards a sustainable future in the industry. With demand comes better rewards, and if this can be communicated effectively, then the current shortfall will hopefully be short-lived.