Posted by Chris Broughton
on 1 April 2015 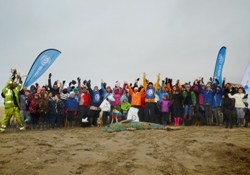 The weekend of the 28th and 29th of March saw Surfers Against Sewage (SAS) coordinate the biggest ever Big Spring Beach Clean at 175 beaches nationwide. As the clocks moved forward to welcome in spring 6,000 people from coastal communities stepped forward to remove a massive 25 tonnes of marine litter from our precious coastlines, an achievement made all the more impressive considering many volunteers battled against heavy rain and winds of up to fifty miles per hour.

Surfers Against Sewage’s Big Spring Beach Clean is now the UK’s biggest single weekend of community beach clean activity, with each event from Land’s End to John O’Groats combining to present a united front against the marine litter crisis. With an astounding 8 million pieces of litter entering our oceans globally every day and over 2500 items for every kilometer of UK beaches, the vast majority of which is plastic the time has come to ramp up our collective actions.

The Big Spring Beach Clean demonstrates the commitment of our coastal communities perfectly, and now Surfers Against Sewage challenging the UK Government and industry to do far more to stop these waves of trash reaching our oceans, waves, beaches and wildlife at all and to join their call to see a 50% reduction in UK beach litter by 2020.

Beach cleans are a fantastic way to unite and inspire people of all ages but everyone agrees that it would be fantastic if they were to become a thing of the past as the tideline of trash recedes.

Surfers Against Sewage encourage and support people to organize their own community beach cleans and will be delivering many more beach clean projects in 2015, so if you’ve been inspired by the Big Spring Beach Clean get in touch with them at beachcleans@sas.org.uk or call 01872 553001.

Hugo Tagholm, SAS’s Chief Executive says; “Each year the SAS beach clean community far exceeds our expectations, in the face of the often overwhelming marine litter crisis they are an inspiration. They’re commitment deserves recognition and in 2015 we’ll be demanding just that from Government and industry. Thank you Big Spring Beach Cleaners!”