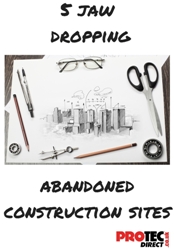 Sometimes even the most carefully planned projects encounter setbacks here and there, meaning that delays are often commonplace. Construction projects certainly don’t just pop up overnight, meaning that patience is of upmost importance, especially when aiming to complete the world’s biggest and best designs.

Sadly, some of the world’s most impressive buildings remain unfinished in various stages of development; some of which continue to be a work in progress and others which have been left in a state of abandonment.

We take a look at five “works in progress” which will guarantee to grab your attention.

1. The Ryugyong (North Korea)
Nicknamed as the “hotel of doom”, work on this hotel started in the 1980s, but halted five years later due to the economic crisis which emerged as a result of the fall of the Soviet Union. The building aimed to be the world’s tallest hotel at the time, acting as a symbol of prosperity to attract Western investment into the country. Work started up again 16 years later, and today it may look completed from the outside, but the interiors tell a completely different story. Embarrassed by the project, there have even been rumours that the building has been airbrushed out of skyline on photographs made available by the country’s regime.

2. Hashima Island (Japan)
If you are a fan of James Bond, chances are you will have seen this island in Skyfall, a ghostly uninhabited collection of apartment blocks crumbling off the coast of Western Japan. Believe it or not the island was once a bustling community due to being rich in coal, but when the mine closed, the island became derelict and quickly decayed. Today buildings continuously collapse due to lack of maintenance and erosion from the sea, meaning that it is a dangerous place to visit- considerable construction work would be required to make the island open again to the public.

3. Sagrada Família (Barcelona)
This Roman Catholic Church is a fine example of Gaudi’s work, and although incomplete, is recognised as a UNESCO World Heritage Site. Gaudi devoted his last years to the project, and when he died in 1926, a quarter of the project was complete. With work still in progress, it is not until the centenary of Gaudi’s death in 2026 that the project is expected to complete. Finishing such a beautiful building obviously comes with a hefty price tag; private patrons funded the initial stages and today money generated from tickets sold to the attraction keep the project rolling.

4. National Monument of Scotland (Edinburgh)
Also known as Scotland’s disgrace, the monument was built in Edinburgh’s city centre in honour of those who died in the Napoleonic Wars, and aimed to emulate the Parthenon on the Athenian Acropolis. With only a third of the total funds collected to complete the project, everything went ahead; a mistake which would mean the monument would never see completion. Several attempts to revive the building work have been attempted, but today it still stands in its abandoned state.

5. Deutsches Stadion (Germany)
Brainchild of Adolf Hitler, you can take one guess why this stadium was never completed. The plan was to build a Roman style arena for nefarious purposes which among many activities was aiming to hold the Aryan Games which wished to replace the Olympic Games. Production came to a standstill when World War Two started. Today the construction pit has been filled by a much more picturesque lake.

Have you ever visited any abandoned construction sites?